Perrin York was a contestant in Season 18 of American Idol.

Perrin's audition was not televised.

Perrin was shown in the second part of Hollywood Week, in a duet with Landen Starkman called "Nervous" singing "Break Even" by The Script. Both members of the duet advanced. For her final Solo performance, she sang "Good as Hell" by Lizzo.

Although not televised, Perrin sang "Electric Feel" by MGMT. Afterwards, the judges told her during her untelevised Final Judgment, that she did not become a Top 20 finalist. 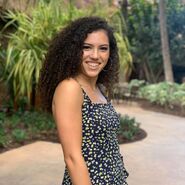 Hawaii Showcase
Add a photo to this gallery
Retrieved from "https://americanidol.fandom.com/wiki/Perrin_York?oldid=45362"
Community content is available under CC-BY-SA unless otherwise noted.