Nick Merico was a contestant in Season 17 and Season 18 of American Idol.

Nick auditioned in Los Angeles. He sang "Back to Black" by Amy Winehouse. All three judges voted "yes", sending him to the next round.

Nick's stay in Hollywood wasn't shown much, but he withdrew from the competition for personal reasons.

Nick auditioned in Los Angeles. He sang "You Say" by Lauren Daigle. All three judges voted "yes", sending him to the next round.

Why Does Lionel Richie Not Like Nick Merico? - American Idol 2020
Add a photo to this gallery

Nick was shown in the "Pop" category of the Genre Challenge, alongside Margie Mays and Kimmy Gabriela. He sang "I Love You More Than You'll Ever Know" by Donny Hathaway. Afterwards, the judges told him that he advanced. He was shown in a duet with Jimmy Levy called "Miami Boyz" singing "Someone You Loved" by Lewis Capaldi. Both members of the duet advanced. For his final Solo performance, he sang "Heaven" by Bryan Adams. He was later placed in the same deliberation room as Shannon Gibbons, Jeb Vonderbruegge, Jovin Webb, Just Sam, Robert Taylor, Geena, Bilaal Avaz, Dillon James, Aliana Jester, Demi Rae, and Louis Knight, where the judges revealed that everyone had advanced.

Nick sang "When I Was Your Man" by Bruno Mars. Afterwards, during the Final Judgment, the judges told him he did enough to become a Top 20 semifinalist. 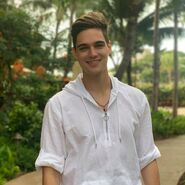 Retrieved from "https://americanidol.fandom.com/wiki/Nick_Merico?oldid=45063"
Community content is available under CC-BY-SA unless otherwise noted.