Hawaii Round (Top 40), Hollywood Round

Margie Mays was a contestant in Season 17 and Season 18 of American Idol.

Margie auditioned in Los Angeles. She sang "Shot" by Lawrence. Although Lionel voted "no", Katy and Luke voted "yes", sending her to the next round.

Margie Mays The Most ENERGETIC Audition Ever! American Idol 2019
Add a photo to this gallery

Margie was shown in the first part of Hollywood Week, in the same Group of Ten as Madison Vandenburg, Tyler Mitchell, and Logan Johnson. She sang "Lay Me Down" by Sam Smith. She advanced and for her final solo performance she sang "Never Enough" by Loren Allred. She was placed in the first deliberation room, along with Uché, Johanna Jones, Laci Kaye Booth, Alejandro Aranda, Nick Townsend, Laine Hardy, Walker Burroughs, Shayy, Drake McCain, Jeremiah Lloyd Harmon, Ryan Hammond, Kai the Singer, Evelyn Cormier, and Madison Vandenburg. It was revealed that everyone in the room advanced.

Margie sang "All About That Bass" by Meghan Trainor. Afterwards, she was called alongside Eddie Island for the Final Judgment. The judges told her that Eddie had advanced and she did not.

Margie Mays “All About The Bass” Enough for Top 20? American Idol 2019 SHOWCASE Round
Add a photo to this gallery

Margie auditioned in Los Angeles. She sang "I Found a Boy" by Adele. Although Katy voted "no", Lionel and Luke voted "yes", sending her to the next round.

Margie was shown in the "Pop" category of the Genre Challenge, alongside Nick Merico and Kimmy Gabriela. She sang "The Voice Within" by Christina Aguilera. Afterwards, the judges told her she advanced. Later, she was shown in a duet with her boyfriend called "Marjonny Ways" singing "Like I'm Gonna Lose You" by Meghan Trainor and John Legend. Both members of the duet advanced. After her final Solo performance, she was placed in the same deliberation room as Jimmy Levy, Kat Luna, Sarah Isen, Peyton Aldridge, Madison Paige, Ari Saage, and Talin Everett, where the judges revealed that everyone in the room was eliminated.

Will Idol LOVEBIRDS Margie Mays and Jonny West be Sent Their Separate Ways? - American Idol 2020
Add a photo to this gallery 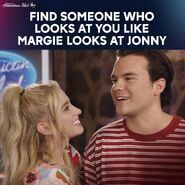 Retrieved from "https://americanidol.fandom.com/wiki/Margie_Mays?oldid=45428"
Community content is available under CC-BY-SA unless otherwise noted.