Maddie auditioned in New York. She sang "Rainbow Connection" by Kermit the Frog. All three judges voted "yes", sending her to the next round.

Maddie was shown in an unknown Group of Ten singing "Dreams" by Brandi Carlile. She advanced and, although initially untelevised, was shown in a group with Caleb Lee Hutchinson singing "Mama's Broken Heart" by Miranda Lambert. She was later shown in the Solo Round singing an original song called "Don't Ever Let Your Children Grow Up". She advanced and during the Showcase Round, she sang "Me and Bobby McGee" by Roger Miller. Afterwards, during the Final Judgment, it was revealed that she made it to the Top 24.

Maddie was shown in Group 2. She sang "Brand New Key" by Melanie and "Bubbly" by Colbie Caillat in a duet with Caillat. The judges deemed her good enough to make her a Top 14 finalist.

Maddie sang "Homeward Bound" by Simon & Garfunkel during the Live Show and "Walk Like an Egyptian" by The Bangles during the Results Show. She was placed in the Top 6 in voting, making her a Top 10 finalist.

Maddie sang "The Bare Necessities" by Phil Harris from the film The Jungle Book. She received enough votes to become a Top 7 finalist.

Maddie sang "Nothing Compares 2 U" by Sinead O'Connor and "If It Makes You Happy" by Sheryl Crow. She received enough votes to become a Top 5 finalist.

Maddie sang "I Told You So" by Carrie Underwood and "God Only Knows" by The Beach Boys. She received enough votes to compete in the finale. 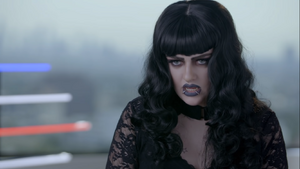 In Season 17, she pranked the judging panel by auditioning in costume as a goth contestant named Lady Mapo, complete with her own contestant number. Once she started to sing however, she took off her costume, revealing that she was in fact Maddie Poppe.