For more about her life, see Lauren Alaina/Personal.

Lauren auditioned in Nashville. She sang "Like We Never Loved at All" by Faith Hill. All three judges voted "yes", sending her to the next round.

Lauren was shown in the first part of Hollywood Week, in the same Group of Ten as James Durbin, Paris Tassin, and Stormi Henley. She sang "Unchained Melody" by The Righteous Brothers. She advanced along with Paris and James. Lauren was shown in a group where they sang "Some Kind of Wonderful" by Soul Brothers Six to Steven Tyler sitting on a chair onstage with them. Only Lauren advanced in her group. For the third part of Hollywood Round, she sang "I Don't Want to Miss a Thing" by Aerosmith. She was placed in the first deliberation room along with Ashley Sullivan, Brett Loewenstern, Jacee Badeaux, Clint Jun Gamboa, Casey Abrams, James Durbin, Chris Medina, and Robbie Rosen amongst others. Everyone in her room advanced.

Back in Hollywood, she sang "Unchained Melody" by Righteous Brothers for her final performance. At the judges' final deliberation, they told her she advanced to the Top 24.

Lauren sang "Turn On the Radio" by Reba McEntire. She was placed in the Top 5 girls with the highest number of votes, making her a Top 13 finalist.

Lauren appeared in the Season 18 Finale. 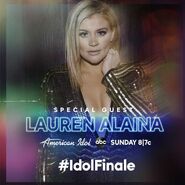 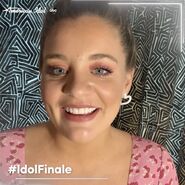 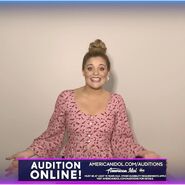