Samantha Diaz, known professionally as Just Sam, was a contestant in Season 18 of American Idol.

Sam auditioned in Washington D.C. She started to sing "You Say" by Lauren Daigle but stopped almost immediately because of her nerves. Afterwards, she sang "Rise Up" by Andra Day. All three judges voted "yes", sending her to the next round.

Sam was shown in the "R&B" category for the "Genre Challenge", alongside Cyniah Elise, Makayla Phillips, and Jordan Jones. She sang "Hearts Ain't Gonna Lie" by Arlissa. Afterwards, the judges told her she advanced. She was later shown in a duet with Sheniel Maisonet called "Short Fuze" singing "Mercy" by Shawn Mendes. Both members of the duet advanced. For her final Solo performance, she sang "I'm Here" by Cynthia Erivo. She was later placed in the same deliberation room as Shannon Gibbons, Jeb Vonderbruegge, Jovin Webb, Nick Merico, Robert Taylor, Geena, Bilaal Avaz, Dillon James, Aliana Jester, Demi Rae, and Louis Knight, where the judges revealed that everyone had advanced.

Sam sang "Como La Flor" by Selena entirely in Spanish. Afterwards, during the Final Judgment, the judges told her that she did enough to become a Top 20 semifinalist.

Just Sam SURPRISES Lionel, Luke and Katy with Her Showcase Song Choice - American Idol 2020
Add a photo to this gallery 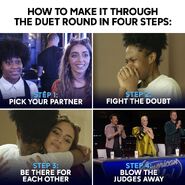 Retrieved from "https://americanidol.fandom.com/wiki/Just_Sam?oldid=45387"
Community content is available under CC-BY-SA unless otherwise noted.