Jordan Jones was a contestant in Season 18 of American Idol.

Jordan auditioned in Los Angeles. He sang "Lovesong" by The Cure. All three judges voted "yes", sending him to the next round.

Although not shown performing, he was shown in the "R&B" category for the "Genre Challenge" alongside Cyniah Elise, Makayla Phillips, and Just Sam and was shown advancing. He was later briefly shown in a duet with DeWayne Crocker Jr. called "JD Smooth". He sang "Unaware" by Allen Stone. They both moved on to the next round.

Jordan sang "Redbone" by Childish Gambino. Afterwards, during the Final Judgment, the judges told him that he did not make the Top 20. 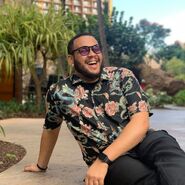 Hawaii Showcase
Add a photo to this gallery
Retrieved from "https://americanidol.fandom.com/wiki/Jordan_Jones?oldid=45454"
Community content is available under CC-BY-SA unless otherwise noted.