Male
Jonathan Jayne was a contestant on Season 6 of American Idol.

Jonathan auditioned in Seattle. He sang "God Bless America". All three judges voted "no", eliminating him from the competition.

He made an appearance at the Season 6 Finale alongside Kenneth to accept the Golden Idol Award for Best Buddies. 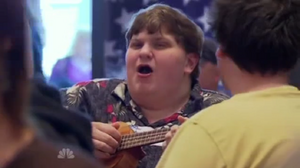 There was some controversy over the judges' comments at the end of Jonathan's auditions. [1]

Retrieved from "https://americanidol.fandom.com/wiki/Jonathan_Jayne?oldid=27643"
Community content is available under CC-BY-SA unless otherwise noted.