Gabby auditioned in Nashville. She sang "Good Girl" by Carrie Underwood at first, before the judges told her to sing something else. She then sang "His Eye Is on the Sparrow". All three judges voted "yes", sending her to the next round.

Gabby was shown in a group with Christina Jones singing "Domino" by Jessie J. She also was shown in Solo Round singing "Ain't No Way" by Aretha Franklin. She advanced, and during Showcase Round, she sang "Church Bells" by Carrie Underwood. At the Final Judgment, it was revealed that she did enough to land a spot in the Top 24.

Gabby was shown in Group 1. She sang "My Church" by Maren Morris and "Stay" by Sugarland in a duet with Sugarland. The judges felt that she did enough to become a Top 14 finalist.

Gabby sang "The Climb" by Miley Cyrus during the Live Show and "Little Red Wagon" by Miranda Lambert. She was placed in the Top 6 in voting, making her a Top 10 finalist.

Gabby sang "Colors of the Wind" by Vanessa Williams from the film Pocahontas. She received enough votes to become a Top 7 finalist.

Gabby sang "I Hope You Dance" by Lee Ann Womack and "How Come U Don't Call Me Anymore?" by Prince. She received enough votes to become a Top 5 finalist.

Gabby sang "Last Name" by Carrie Underwood and "I Have Nothing" by Whitney Houston. She received enough votes to compete in the finale.

Gabby sang "Rivers Deep", "Little Red Wagon" by Miranda Lambert and "Don't Stop Believin'" by Journey. During the Finale, it was revealed she had the lowest number of votes, meaning she placed third behind Caleb Lee Hutchinson and Maddie Poppe.

In March 2019, it was announced that she became engaged to Cade Foehner and married on October 5, 2019.[1]. They are now expecting their first child. Gabby also appeared during the Season 18 Finale. Gabby's song "I Hope" was released on July 29th, 2019 and achieved considerable success in the Country market and peaking at #16 on the Billboard Hot 100 becoming Certified 2x Platinum in June 2020 and having a remix version with Charlie Puth released on April 27th, 2020. This makes her the most commercially successful contestant since American Idol rebooted. 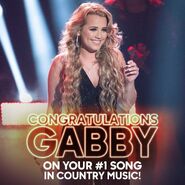 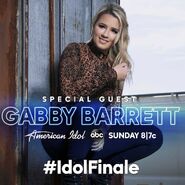 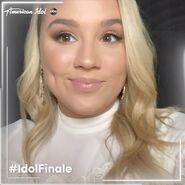