Francisco Martin was a contestant in Season 18 of American Idol.

Francisco auditioned in Sunriver. He sang "Alaska" by Maggie Rogers. All three judges voted "yes", sending him to the next round.

Francisco was shown in the "Singer-Songwriter" category of the Genre Challenge, alongside Sofia Schuster, Adam Curry, Jonny West, and Dillon James. He sang "Hold Back the River" by James Bay. Afterwards, the judges told him he advanced. Later, he was shown in a duet called "3:15" with Louis Knight singing "Break Even" by The Script. Both of them advanced. After his untelevised final Solo performance, he was placed in the same deliberation room as Jonny West, Arthur Gunn, Sophia Wackerman, Franklin Boone, Makayla Phillips, Kimmy Gabriela, DeWayne Crocker Jr., Cyniah Elise, and Lauren Mascitti, where it was revealed by the judges that everyone in the room had advanced.

Francisco sang "Falling" by Harry Styles. Afterwards, during the Final Judgment, the judges told him that he did enough to become a Top 20 semifinalist. 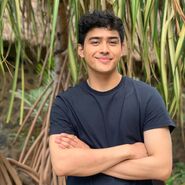 Retrieved from "https://americanidol.fandom.com/wiki/Francisco_Martin?oldid=44746"
Community content is available under CC-BY-SA unless otherwise noted.