Demi Rae was a contestant in Season 18 of American Idol.

Demi Rae auditioned in Sunriver. She sang "Mad at You" by Noah Cyrus. All three judges voted "yes", sending her to the next round.

Although her performance was not televised, she competed in the "Pop" category of the Genre Challenge and was shown advancing alongside Louis Knight, Genavieve Linkowski, Robert Taylor, and Geena. She was shown briefly in a duet with Michael Wingate called "Synergy" singing "Like I'm Gonna Lose You" by Meghan Trainor and John Legend. She advanced to the Top 40. After her untelevised final Solo performance, she was placed in the same deliberation room as Jeb Vonderbruegge, Jovin Webb, Nick Merico, Just Sam, Robert Taylor, Geena, Bilaal Avaz, Dillon James, Aliana Jester, Shannon Gibbons, and Louis Knight, where it was revealed by the judges that everyone had advanced.

Demi sang "Lonely" by Noah Cyrus. Afterwards, the judges told her she did not become a Top 20 finalist. 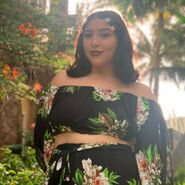 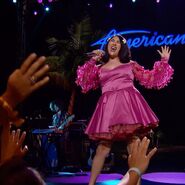 Hawaii Showcase
Add a photo to this gallery
Retrieved from "https://americanidol.fandom.com/wiki/Demi_Rae?oldid=45451"
Community content is available under CC-BY-SA unless otherwise noted.