Male
Dibesh Pokharel, known professionally as Arthur Gunn, was a contestant in Season 18 of American Idol.

Arthur auditioned in Milwaukee. He sang "Girl from the North Country" by Bob Dylan and "Have You Ever Seen the Rain?" by Creedence Clearwater Revival. All three judges voted "yes", sending him to the next round.

Arthur was shown in the "Singer-Songwriter" category of the Genre Challenge, alongside Julia Gargano and Marna Michele. He sang "Hard to Handle" by The Black Crowes. Afterwards, the judges told him he advanced alongside Julia. For his final Solo performance, he sang his own version of "Have You Ever Seen the Rain?" by Creedence Clearwater Revival. He was later placed in the same deliberation room as Jonny West, Sophia Wackerman, Franklin Boone, Makayla Phillips, Kimmy Gabriela, Francisco Martin, DeWayne Crocker Jr., Cyniah Elise, and Lauren Mascitti, where it was revealed that everyone had advanced.

Arthur sang "Is This Love?" by Bob Marley. Afterwards, the judges told him he did enough to become a Top 20 finalist. 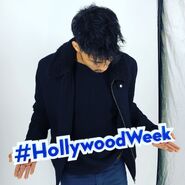 Hawaii Showcase
Add a photo to this gallery
Retrieved from "https://americanidol.fandom.com/wiki/Arthur_Gunn?oldid=45270"
Community content is available under CC-BY-SA unless otherwise noted.