Alejandro auditioned in Los Angeles. He sang two original songs, one called "Out Loud" on the guitar and another called "Cholo Love" on the piano. All three judges voted "yes", sending him to the next round.

Alejandro was shown in the same Group of Ten as Laci Kaye Booth. He sang "Sorry" by Justin Bieber. For his final solo performance, he sang an original song called "Ten Years". He was placed in the first deliberation room, along with Uché, Johanna Jones, Laci Kaye Booth, Nick Townsend, Laine Hardy, Walker Burroughs, Margie Mays, Shayy, Drake McCain, Jeremiah Lloyd Harmon, Ryan Hammond, Kai the Singer, Evelyn Cormier, and Madison Vandenburg. It was revealed that everyone in the room advanced.

Alejandro sang "Yellow" by Coldplay. Afterwards, the judges told him that he did enough to become a semifinalist.

Alejandro sang "I Fall Apart" by Post Malone and "There Is a Light" by Ben Harper and The Blind Boys of Alabama in a duet with Harper. Afterwards, the judges told him he did enough to become a Top 14 finalist.

Alejandro sang "One Dance" by Drake, ft. Wizkid & Kyla during the Live Show and a reprise of his original song "Cholo Love" during the Results Show. He was placed in the Top 7 in voting for that week, making him a Top 10 finalist.

Alejandro sang "Remember Me" by Natalia Lafourcade & Miguel from Coco. He received enough votes to be considered "safe" for another week.

Alejandro sang "Under Pressure" by Queen & David Bowie and "Mrs. Robinson" from The Graduate in a duet with Walker Burroughs. He received enough votes to be considered "safe" for another week.

Alejandro sang "White Rabbit" by Jefferson Airplane and an original song called "Poison". He received enough votes to be considered "safe" for another week.

Alejandro sang "No Woman, No Cry" by Bob Marley and the Wailers, "Sorry Seems to Be the Hardest Word" by Elton John and an original song called "Blesser" (dedicated to his musical mentor). He received enough votes to land a spot in the American Idol Finale.

Alejandro sang three original songs, called "Millennial Love", "Tonight", and "Out Loud". He received more votes than Madison Vandenburg, but not more votes than Laine Hardy, making him the runner-up.

Story of the Season - American Idol 2019 on ABC

Alejandro appeared in the Finale of Season 18. 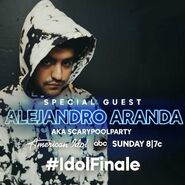